One in three will die with Dementia

As we kick off a week of blogs and stories in support of Dementia Awareness Week, Kelly Joynes tries to understand how dementia really affects the UK, with one in every three over 65’s said to die suffering from the condition.

Dementia is a condition we know little about yet it still instills fear and worry. Facing your future with a fear you’ll forget the past is a genuine concern as the nation gets older, and with statistics such as ‘one in three over 65s will die while suffering from dementia’ being banded about, dementia will always remain a huge topic.

The Alzheimer’s Society define dementia as:

“The word dementia describes a set of symptoms that may include memory loss and difficulties with thinking, problem-solving or language. Dementia is caused when the brain is damaged by diseases, such as Alzheimer's disease or a series of strokes.“

All forms of dementia are progressive, which means that over time the brain becomes progressively more damaged, but the impact on the 800,000 individuals coping with dementia is unique to each person. Despite the wealth of knowledge available, and the high-profile exposure dementia gets, the impact is still so misunderstood.

I have been a Dementia Friends Champion since December 2013 when I received training from the Dementia Friends programme, an initiative set up by the Alzheimer’s society.  The course hopes to equip people with the skills they need to deliver sessions on living with dementia and how to encourage the growth of dementia friendly communities. It’s about encouraging support rather than segregation. The dementia community shouldn’t be shunned, but are a population that require understanding, support and care.

One of the analogies we use at the ‘friends sessions’ talks about the brain being made up of fairy lights and, for somebody living with dementia, those fairy lights may flicker from time to time and some of the lights will turn off permanently. This reflects memories that may be unclear or that may be permanently lost. Short-term memory loss is one of the first symptoms of dementia and as dementia is a degenerative illness, over a period of time, more memories will fade.

If you want to experience dementia for yourself, Alzheimer’s Research UK have launched the FaceDementia app, which “takes over” your personal Facebook page to temporarily erase important memories, mimicking how dementia affects the brain. 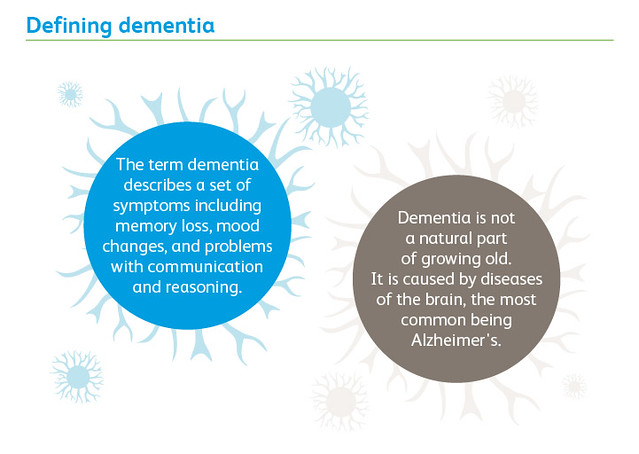 Bit by bit, personal information, friends, photos and memories begin to disappear before your eyes. Don’t worry, there’s no impact on your actual Facebook page as the app simply ‘recreates’ your page

"Facebook's appeal is that it can gather your friends and family and keep them close, with memories and contacts all contained within one space. It also develops a diary of your life since you joined the site and documents your thoughts and musings during that time.

"We wanted to use these Facebook features to illustrate how those thoughts and memories can be confused, or forgotten altogether, as experienced by some of the hundreds of thousands of people across the UK living with dementia.

"Stigma around dementia is due in part to a lack of public awareness and understanding, so FaceDementia will be invaluable in helping people better understand the condition."

A key message that I always convey in my ‘friends sessions’ is that it is possible to live well with dementia. With the right level of support and understanding people living with dementia can remain independent for longer and access the appropriate support networks. I have heard lots of great examples in my information sessions of family members that have put very simple measures in place to ensure that simple everyday tasks are achievable.

There’s lots of help and advice out there, such as this guide from Whittington NHS or this great blog from Sarah Reed of ‘Many Happy Returns’, which gives ten tips like avoiding direct questions and how much impact a smile can have.

It not just families and friends of Dementia sufferers who can take heed of this advice. Housing associations, councils and care providers all have a part to play, from appointing Dementia champions like me to building homes in a ‘friendly’ way. Bromford’s Franciscan View older person’s scheme in Lichfield has a different colour carpet on each floor of the building, so residents know if they’re stepping out on the right floor just by looking down. It’s easier for Dementia suffers to associate the colour with their home, rather than wandering the corridors after losing their way by the lifts.

When I run a dementia friends information session, I always begin with an icebreaker. I ask each person attending to say the first word that comes in to his or her head when I say ‘dementia’. The words that are often used are lonely, isolated, confused, sad and memory loss. This may reflect the way that society feels about dementia and its effects, generally negative words that may concern those people worried about their own symptoms. But what if a diagnosis was seen as positive, that it unlocked appropriate services and support? Increasing awareness is vital; we all need to talk about dementia.

This is why attending a dementia friends information session can be so beneficial; it highlights the patience and understanding required by those of us encountering people living with dementia. This is a growing concern, especially with reports of neglect in care homes on the rise, such as those reported by BBC’s Panorama earlier this month.

By 2021, 1 million people in the UK will be living with dementia; I think we owe it to these people to contribute to making sure our communities are dementia friendly.