Last week was Women in Construction Week and to mark the event our head of construction Simon Kershaw sat down for a chat with assistant site manager Jay Lewis in the site office on Bouncers Lane in Cheltenham where we’re building 65 new homes. 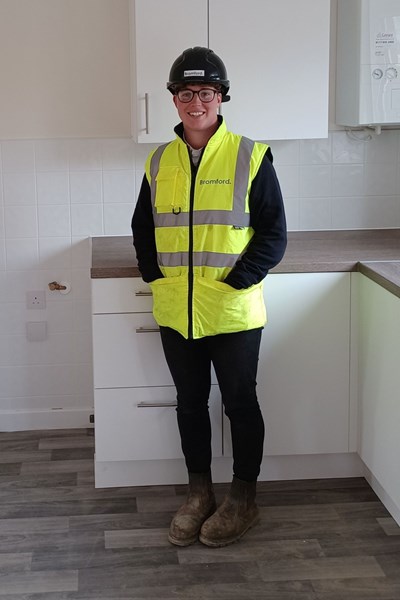 Why did you want to work in construction, Jay?

I didn’t enjoy school very much; I was more of a hands-on person and wanted to be outside all the time. So, when I left I decided to look for an apprenticeship and came across a trainee site manager role and it was something that grabbed my interest. So I started that in 2015 and it’s just continued from there, and I joined Bromford in December 2020.

What does your role involve and what do you enjoy about it?

I’m on site every day and every day there’s lots to do. Checking health and safety issues is one of the biggest things, but my role is also about managing contractors, liaising with everyone on site, checking the quality of the work and getting everything ready for handover for when customers move into their new home.

I’ve always like being outside, so that’s a big part of it for me. And I just like being on site, being with the lads and they’re really nice to me. I enjoy seeing a site come together, going from nothing into something and then getting to hand it over to the customers as well, that’s really rewarding. When I joined Bromford I had another job offer from a big housebuilder, which would have involved building £500,000+ homes. But I wanted to come here because there was a clear purpose to why we build our homes and you see that reaction from our customers when they move in.

What’s it like working in a sector that’s very male-oriented?

To be honest It’s not something that’s ever been an issue for me. A lot of my friends are men and I can’t really remember having an issue at work.

But sometimes I can be in the site office and a man walks in for the first time and they see me and are so surprised at seeing a woman in there that they’ve walked out again not knowing what to say. But I always go after them and ask them what they want or if I can help them and we talk a bit and the next time they see me its not an issue. I think there are still some men who are surprised to see a woman on site and are used to it just being men on site. But it’s only ever been an initial surprised reaction from just a few people; generally everyone is really nice.

Mostly it’d be nice to see more women working on sites. I really enjoy it and I think lots of women would as well, but perhaps they never considered it as a career choice because it’s seen as a male-dominated industry.

There’s so much to learn and think about every day. It’s a good career path and I know there will be lots of opportunities for me in the future. There’s a housing crisis in the country so I think the demand for people doing jobs like mine is only going to increase and if more women step into those roles then that can only be a good thing.