They say that a week is a long time in politics, so the past four years must feel like a lifetime for inspirational David Chadwick.

Wheelchair-bound David moved into his new Bromford home at Betjeman Place, Wolverhampton, a bungalow with a wet room, back in 2017. His two sons had flown the nest and a series of heart attacks meant the 66-year-old wanted to downsize to a home that better catered to his needs.

His neighbourhood coach Nina Pearce encouraged him to check out the Big Venture Centre which had then recently opened. David’s preconceptions about community centres initially stopped him from taking a look inside.

“One day I was walking my dog Alfie, and a lady called Wendy asked me to come inside and my response was “oh no, it isn’t for me” and that was my initial feeling. I had always been independent, always worked, and I didn’t think I needed to be with loads of old people,” David admits.

Having taken the plunge and gone inside for a cuppa’, David hasn’t looked back and was quickly invited to be on the board of directors at the Chesterton Road community hub.

“I was made to feel very welcome by everybody and overcoming that initial obstacle changed my perspective forever because it’s a wonderful facility which can be used by everyone in the community, both young and old.”

Throughout the peak of the first lockdown, David and the other volunteers served up over 10,000 cooked meals for the community and handed out more than 140 food parcels a week to struggling families, spurred on by their onsite allotment and donations from various organisations such as the City of Wolverhampton Council.

Wanting to support other residents to become more self-sufficient, they then published the WV10 Cookbook – and had an initial 1,000 copies printed – showing people how to cook tasty meals on a budget as part of their Life After the Food Bank project. They also provided cooking classes, a drop-in café, food and energy top up vouchers, and white goods such as ovens and microwaves to those who need them. 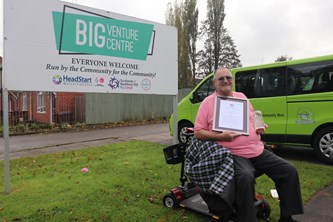 In October, the 66-year-old and the other great volunteers were awarded one of the highest accolades in England after winning the Queen’s Award for Voluntary Service, as well as an additional Special Award for the diversity of support they provided during the pandemic. Representatives from the Big Venture Centre were crowned with an award crystal and certificate by John Crabtree, Lord-Lieutenant of the West Midlands, and will head down to Buckingham Palace next summer for a garden reception with the Queen.

“Somebody has recognised what we’ve done and so you do feel valued and an immense sense of pride at what we’ve achieved. Five years ago, my two boys had just left home and I only had my carer and dog Alfie. Now I have so many friends and this hub for the community has really transformed my life,” David went on.

Nina added: “Right from our first meeting, I knew there was something special about David. He’s like a local spokesperson for the community and his involvement in achieving the award is truly inspiring."

The centre has outgrown its current site and provisional planning permission was recently granted for the ambitious refurbishment and extension of the existing building as well as a brand-new facility with a community gym on the field behind. The Big Venture Centre is now looking to raise the remaining funds to make their vision for growing the service a reality.

Head over to their Facebook page if you want to volunteer or help with their fundraising efforts.