A late celebration for barber John

Barber John Thacker should have been celebrating 50 years in business last November.

But the pandemic gave his plans the chop and he couldn’t open his shop to mark the occasion. Now with the relaxation of restrictions he’s back in business and marking his half century – even if it’s ten months later than he expected.

Thacker's Barbers, on Stowe Street, Lichfield, is one of Bromford’s commercial rental properties and John has been a tenant since 1970. John started his business at the age of 23 and was told by one local worker that he’d chosen the wrong place for his business and would be shut within six months. Yet he’s still going strong in his 51st year. 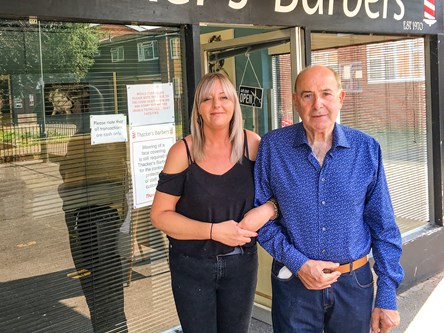 “I can’t believe I’ve been here for 50 years really but I’m still as enthusiastic as when I started and have many loyal customers,“ said John, pictured with manageress Sarah Fisher. “My parents were concerned about me starting my own business and leaving my then employer. But I had a great working relationship with him and when he retired, he came to work for me part-time.”

John has plenty of lovely anecdotes about customers. On one occasion a young man was asked to put his glasses on to see the back of his head in the mirror, which he obligingly did. After leaving the shop the stylist said: “you’ve left your glasses”, to which his mum replied: “he doesn’t wear glasses”. They’d been left behind by the previous customer!

On another occasion a boy picked up the clippers and took out a great chunk of his own hair before he could be stopped – only for John to come to the rescue with a very short back and sides to get him back into shape.

John added, “Most of my customers have been coming to the shop for years and in some cases five generations of families have had their hair cut at Thacker's. It’s great to be open again and to look forward to having a proper celebration in November. In fact, I want to be here for many more years to come and to be able to celebrate 60 years in business too.”

Bromford’s commercial services officer Tom McQuaid said: “In this day and age, with the high street losing so many traditional names and with so many local shops closing, it’s a real testament to Mr Thacker’s achievement and business acumen that he is still here serving his local community.“