Plans have been submitted for our latest regeneration scheme to build new energy, efficient homes in South Gloucestershire.

We want to build 11 new homes on the site of four existing hard-to-heat properties and a neighbouring rank of garages in Mendip Crescent, Downend. The plans were submitted earlier this month following consultations with customers living in the properties and the neighbouring area.

The proposal is part of our ongoing work to regenerate some of our older properties. In recent years we have completed similar redevelopments of properties in Coalpit Heath, Iron Acton and Little Stoke. And earlier this month we completed work to build 17 new homes in Rodney Crescent in Filton to replace eight former properties.

Our planning application for the Mendip Crescent site proposes two one-bedroom houses, eight two bedroom houses and one three bedroom home. All the homes would be available to rent. 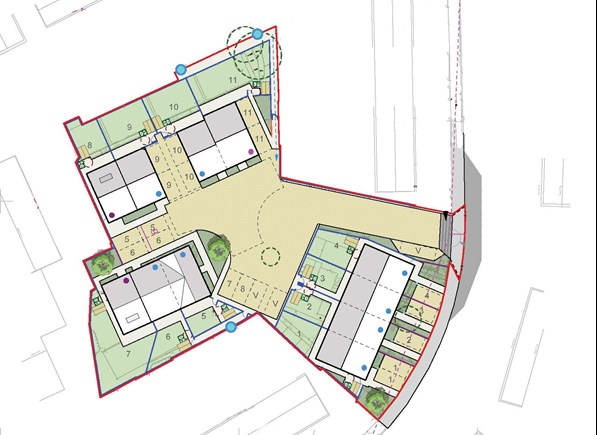 Project manager Charlotte Conolly said: “We want to provide homes that our customers can thrive in. Unfortunately some of our properties, such as these ones in Mendip Crescent, which were built shortly after the Second World War, are no longer suitable for the 21st Century and suffer from issues such as damp and are expensive to heat.

“Not only are we proposing to build more homes than we currently have on the site to tackle the local shortage of affordable housing, the homes we build will be warmer and cheaper to heat than our existing properties.”

The proposal is part of our expanding housebuilding programme which aims to build more than 1,000 affordable homes over the year ahead.