A fundraising family from Cirencester have raised an incredible £4,500 for the NHS to say thank you for their work during their coronavirus pandemic.

Paul Robertson and his children Thomas, 6, and Iris, 4, ran a mile a day, every day in May as part of their 30 Miles in 30 Days challenge. They took to the streets running in different costumes every day, after receiving donations from Tesco and the Second Chance Charity Shop. Friends donated costumes for them to run in, whilst one woman made superhero capes for them to run in.

It all stemmed from an idea Thomas had while they were out running for their daily PE session.

“Thomas asked if we could ‘raise money to fix things,’” Paul said. “I asked what he would like to fix and Iris said ‘we should raise pennies to fix the doctors and nurses.’ That’s when we decided to raise cash for our doctors and nurses and the kids and me pledged to run a mile a day over 30 days.

When the lockdown had begun Paul and his wife Leoni had contacted their elderly neighbours to offer to collect shopping for them or run any other errands on their behalf to help them stay safe from the virus. As the family kept running throughout the month and the donations kept pouring in, the family continued to support five neighbours with their shopping. And on the last day of their 30 Miles in 30 Days challenge for the Gloucestershire hospitals' Rapid Response Appeal, the family’s generosity was acknowledged by the whole neighbourhood. 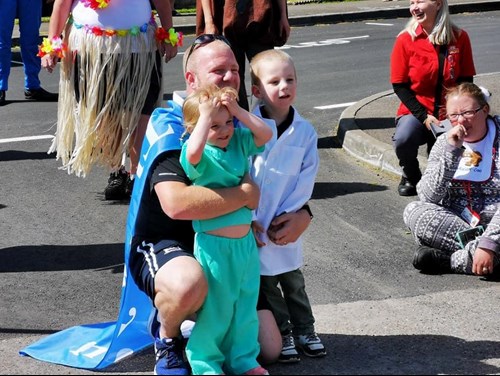 “These lovely neighbours showed true community spirit by coming out of their houses and bungalows on the final run and forming a socially distanced guard of honour for the kids,” Paul said. “Most of them were out cheering and clapping for us all, including our posties in fancy dress and other residents from nearby streets as we crossed the finishing line. Topped off with all of the fancy dress posties, neighbours from neighbouring streets the kids passed the finishing line.

“We had no idea that these two little ones would end up raising over £4,500. They even made it onto the Pride of Britain Facebook page. We continue to keep an eye on all of our neighbours and we’re enjoying doing it. It’s so nice to help out and give something back to our community.

“Our experience of lockdown has been amazing for our community. We’ve engaged with neighbours that we have knew before and have shared fun, laughter and most importantly cakes! One neighbour turned 90 so we arranged a street sing song and also held a socially distanced VE Day party where people came out and sat in their front gardens.”

Find out more and make a donation

Our relationship with customers