Les Good, the first chairman of Merlin Housing Society and a fearless champion for customers, has died.

He passed away last Thursday at St Peter’s Hospice in Bristol, six weeks after being diagnosed with cancer. Les was an involved customer with the council, Merlin and Bromford for 20 years, always willing to go the extra mile for them.

Born in Portsmouth, he left home at 12 and joined the Merchant Navy as a cabin boy and travelled the world. On returning to the country he entered the pub trade and became increasingly active in the National Association of Licensed House Managers. But in 1982 he was made redundant and lost the tied accommodation that came with the pub. Struggling to find a place to live he and his wife moved into council housing in Kingswood.

Then in the late 90s he began to get involved in housing affairs, joining the council’s local tenants’ forum and becoming one of the first tenants nationwide to be appointed tenant inspection advisor in the housing section of the Audit Commission, a role he retained for ten years.

As chair of the tenant and leaseholder forum he was ideally placed to help oversee the formation of Merlin after council tenants voted in favour of the proposals in 2005. He became chair of the shadow board, before taking on the role of chair of the board after Merlin was formed in 2007.

He served as chair for five years, but continued to remain in involved after stepping down from the Board. He joined Kings Forest Community Group, was a member of the Dragons Den tenant panel (pictured below), a member of the Customer Assembly and chaired the Scrutiny Group. He had also recently been a founding member of our new Customer and Communities Influence Network which was launched in December.

With his involvement in so many parts of the business Les was a familiar figure around Merlin's offices and also presented at staff briefings and took part in customer fun days. 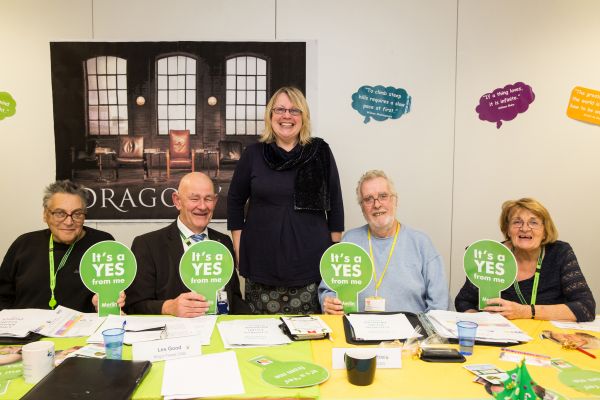 Speaking in 2012 as he stood down from as chair of the board, Les said he was proud of what the organisation had achieved under his tenure

“I’ve had great personal satisfaction being involved with Merlin since the society was formed,” he said. “There have been difficult, sometimes even daunting, challenges over the past five years, but with a very good Board and Executive team in place we overcame them. There are now some excellent teams working well together for the good of residents and the local area.”

Paying tribute, chief executive Robert Nettleton said: “Les was instrumental in creating Merlin, and has worked tirelessly over the years to improve what we do. He will be very much missed.”

Customers living in our 43,000 homes will have an even greater level of influence in shaping and improving services after the launch of a new…

Midlands-based Bromford and South West-based Merlin have officially launched their new organisation after finalising the legal aspects of the deal,…