Please head to our Coronavirus FAQs for more information on our response to the announced Tier 5 national lockdown. [Updated 05/01/2021 at 22:37]

Imagine moving away from your home town and losing all the help and support that you’d been used to. That’s exactly the situation Jo found herself in when she moved to Northampton. Support worker, Michelle Wills, takes up the story.

Jo has been diagnosed with personality and eating disorders and regularly self-harms. Before moving she was receiving long-term specialist support but when she moved to Northampton she just had the help of her GP.

This wasn’t anywhere near enough and Jo really struggled to cope which resulted in her being sectioned and spending quite a long time in a local psychiatric hospital – this is where I first got in touch with her. It was a really crucial point in Jo’s recovery and the help we offered to help her through the hospital discharge process, and to get back home, was invaluable.

Creating stability is key to giving people the best possible chance of recovery.

When we first started working with her, Jo’s benefits needed updating and she wasn’t receiving Personal Independent Payments (PIP) which she was entitled to because of her poor health. Creating stability is key to giving people the best possible chance of recovery, so in the early days I was meeting with her up to five times a week to try and get her settled at home as soon as possible.

As well as helping to get the right benefits in place, Jo was supported to set up her utilities and we completed a budget planner to help her get organised. Payment plans were set up but there was a shortfall on her rent as she lives in a two bedroom property and was affected by the bedroom tax.

Jo has a son who lived with her before she went into hospital but had since moved in with his dad. Although Jo was living alone, she didn’t want to give up the property as she always hoped that she would get well enough for her son be able to stay overnight sometimes.

We talked to the council, who agreed that she could receive discretionary housing payment (DHP) which allowed her to stay in her home. This was a massive boost for Jo as it meant she had the stability needed to help in her recovery.

One of the main reasons that Jo had to spend time in hospital was the lack of mental health support that she received when moving to Northampton, so a big part of my work with her was to ensure that she got the specialist help she needed. Initially I made sure that she had access to the crisis services so she had professionals to call if she felt unwell who could help to prevent her feelings from escalating.

Jo now volunteers at the local food bank and has started a karate course once a week.

Things starting to look up

Over the next few months things started falling into place for Jo. She was awarded PIP and now receives £82.30 per week. Her ESA also had to be reapplied for as it had been stopped meaning that she is now getting a total of £186.90 per week which includes the severe disability component – and she was also awarded DHP of £21 a week to offset her bedroom tax charge.

Jo wasn’t great at taking her medication which meant her mental health still fluctuated so we liaised with the GP to find a solution. Her medication is now delivered in blister packs to her which makes it much easier for her to manage – resulting in her health becoming far more stable.

As she started feeling well enough, Jo was encouraged to get involved in various activities to help her feel part of her community. She now volunteers at the local food bank every week and has started a karate course once a week. She also comes to our tea and talk groups and has made some new friends.

Now that she has the motivation to look after herself, Jo has been encouraged to plan her meals better. This includes making healthy choices while shopping - which she now does alone, something she wouldn’t have contemplated a few months ago.

Jo’s son lives with his dad but as she started to get better she began having contact with him again and things have progressed so well that now he comes for overnight stays which is fantastic news for all concerned. 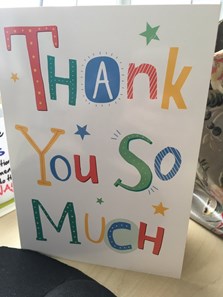 Jo’s life was transformed in just seven months - initially she was visited between four and five times a week but as she became better and her confidence grew this got less and less until she no longer needed our support.

The help she received when she needed it most has not only set her up, but has helped the council’s budget too. Jo no longer needs a long term care package through the social care team as her ‘wellbeing score’ has gone from just 15 when we started working with her, to 28 -  with this expected to grow as she continues the therapy and health support she is now receiving.

Jo was so happy with all the help and support she’s received from Michelle, she sent her this lovely ‘Thank you’ card. 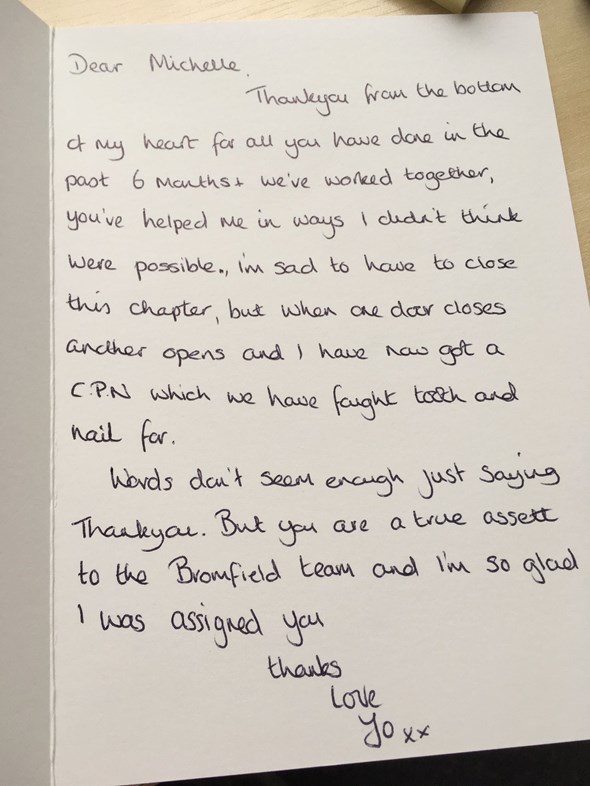 The chance to be me

Depression – A word that haunts one in five of us!

It’s really tough seeing how much people struggle financially when they’re not receiving the benefits they’re entitled to.