The many benefits of this highly energy-efficient scheme, which involved the replacement of old, inefficient storage heaters with 3 Vaillant communal heat pumps, as well as buffer tanks and weather compensation self-modulating systems, were soon realised by the client and residents alike, and included:

The project, which has already won a range of national and regional awards, including Renewable Heat Project of the Year at the National Energy Efficiency Awards, has now been recognised at international level at the 2021 Green Apple Environment Awards, which reward and promote compelling examples of environmental best practice. Pictured from left are: Mark Burton – business manager at Vaillant, Lee Moulson – contract supervisor at J Tomlinson, Marc Goldby – head of home investment at Bromford, Phil Williams - founder at PLAN-IT ECO. 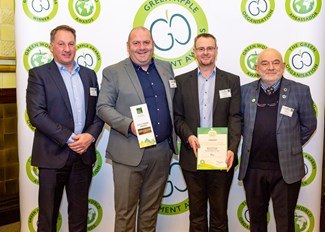 Bromford’s head of home investment, Marc Goldby, said: “We want to provide homes that enable our customers to thrive. Our partnership with J Tomlinson and Vaillant has done just that with an innovative solution that overcomes the challenges of these properties and the restrictions imposed by their location.

"We want our customers to be spending less on their fuel bills, so they have money for other things as well as reducing our impact on the environment.

“Collaborating with J Tomlinson on the retrofit scheme has been extremely rewarding and we are excited to be recognised alongside them with this Gold Standard award.”

J Tomlinson continues to work with forward-thinking organisations in its journey to help create a low carbon future, with low carbon and renewable energy schemes delivered in partnership with clients.

Darroch Baker, special projects director at J Tomlinson, commented: “It’s fantastic that the huge environmental, economical and social benefits of this scheme have been so widely recognised – and now by an international environmental thought leader such as the Green Organisation. J Tomlinson is committed to playing our part in creating a greener future, partnering with like-minded organisations to decarbonise and future-proof the UK’s buildings via application of low carbon and renewable technologies.

We hope that the success of this scheme will encourage more housing associations to identify opportunities associated with retrofitting their portfolios of older properties in line with the UK’s 2050 zero carbon target.”

Commercial Director, Steve Cipriano at Vaillant added: “We are delighted that our long-standing partners, Bromford and J Tomlinson, have received the Gold standard at the Green Apple Environmental Awards.

"This innovative project was unlike anything we have ever worked on previously and is a deserved winner.

"With the site located in a conservation area, J Tomlinson was restricted on which technology could be used as there are strict rules on how the exterior of the properties must look. Collaborating with Vaillant on the system designs, the installation went seamlessly with little disruption to tenants, and since, tenants have seen a 40% saving on their annual fuel bills.”

Launched by The Green Organisation in 1994, the Green Apple Awards have become internationally recognised for identifying businesses who demonstrate environmental best practice.

Head to the Green Apple Awards website for more information.