He doesn't really know who we are

Hayley Murphy helps to raise awareness by talking about the impact that her dad's dementia has had on the whole family.

This subject is really close to my heart, my dad, John was struck with this illness in is early 60’s. He had worked from the age of 15 before retiring at 62. Within six months he was diagnosed and only a year after retiring, dementia had really taken a hold. Mom went from being a wife and partner to becoming his carer.

Mom managed to care for him for the next two years but due to the dementia it became increasing challenging for her. Dad became more and more frustrated and even began to hit out. Reluctantly, we had to make the worst decision of our lives and dad was taken into a care home.

We managed to find a care home only a couple of miles from where mom lived so she was able to visit every day but dad's condition soon got much worse. The staff looking after him found it really difficult to cope so, after a lot of searching we finally managed to find a lovely home that could accommodate people with dementia and challenging behaviour. The only problem was that it was a 30 mile round trip meaning that only weekend visits would be possible if he moved there.

It was a heart-wrenching decision but one that we knew we had to make. The new care home could meet dad's needs and although mom struggled, it was decided that he would be moved. The whole situation affected her really badly, throughout it all mom still held on to the thought and belief that he would come back home some day.

Sadly we lost our mom in June last year and we had to try and tell dad the news - he seemed to understand but can't really be sure whether he really does or not. 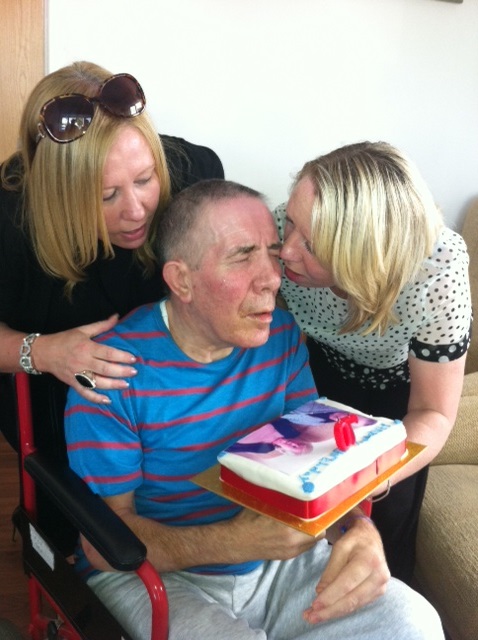 He's now settled into the home and celebrated his 70th Birthday last September. He seems to be happy enough and even though he doesn’t really know who we are he still enjoys it when we take him to the local for a pint.