Do small things with great love.

It's National Alcohol Awareness week and we've invited guest bloggers to contribute their thoughts and experiences on this subject.

Here, support worker, Paul Stirling explains how he has always wanted to make a difference...and invites us all to do the same.

“With a quarter of England's population consuming hazardous amounts, alcohol addiction already is costing the NHS huge amounts each year.

Our nation is paying a high price for our “binge drink culture”, 2.7 billion pounds to be exact. That’s quite a lot of money. “If the trend continues the burden will be unsustainable, says the Royal College of Physicians and NHS Confederation”. As shocking as this cost is, for me, what shows the magnitude of the problem is in fact shown in just how short a time it has taken to get to this point. The cost to the NHS has DOUBLED in LESS than 5 years.

It’s clear that not only do we have a problem in the UK, but it’s a problem that is spiralling out of control…and the cost is MASSIVE.

But the cost is not just to our country’s pocket, but to the lives of those affected by those struggling to cope with alcohol addiction. We hear and read the numbers, and forget far too easily the devastation caused to the lives behind them.

I support John*.  His upbringing was difficult. He says that for as long as he can remember he felt different, as though something wasn’t right about him. John met a girl in his 20s and they had the joy of having a son. Whenever John talks to me about his son, his face lights up and you hear in his words, the indescribable, unconditional and relentless love of a father. John is a great guy. He is kind hearted and softly spoken, and is the kind of person that you find easy to be around. He’s a likeable guy. We love fairy tale endings right? But John’s story isn’t anywhere near one. Throughout his relationship with his partner his mental health continued to deteriorate, which unfortunately led to John’s partner leaving him and taking his son away. Throughout a messy process, it was agreed that John could see his son every weekend at a family centre. This lasted for a few months, until his ex-partner refused him access and moved home, leaving John no way of contacting her or his son. Devastated, this had a massive impact on his mental health, and John turned to the one thing that was reliable; alcohol. John’s struggle with addiction, and his journey in and out of services has been a long one. It’s had its downs, more than its ups, and it’s something that John is still fighting. Due to his dual diagnosis of mental health and alcohol addiction, it has made every attempt of ours to refer him to services very difficult. Mental health services can’t give him the necessary treatment or therapy while the alcohol is an issue, and alcohol services here in Northampton seem to have very limited resources. John has got to the point where he recognises his problem, and wants to deal with it, but was recently told the only bed that could be found for him in a residential setting for a detox, was in central London. Which, with his mental health condition, near enough makes it impossible for him to attend. John has since chosen to do a ‘Home detox’, but with no family, friends (who are dry) or any real network of support, it is going to be a challenging road to recovery.

Is John a drain financially to our nation? I hope we don’t see it that way. People are more than numbers, and rarely are the stories ever told of the people behind them. Life is easier when we see everything as black or white, but the truth is…it’s not. Life is messy, because people are messy, and people are messy, because life is messy. Are there solutions to our 2.7 billion pound problem? I sure hope so. It’s an easy task to commentate problems, but it does nothing to solve it. I believe the answer for this issue, will be complex and long-term, and starts in our education system. I believe we have to see the ‘issue’, not as the problem, but as a sign of a bigger problem. The bigger problem being, that we are not happy with our lives. We are using alcohol to mask our unhappiness, and no matter how fleeting a moment it may be, to lose the stress, strain and difficulties we face day-in day-out. This is definitely something our Government needs to be thinking about.

But what can we, who aren’t decision makers in our government do today to make a difference?

Refuse to live as an island. Addiction causes breakdowns in marriages, relationships, friendships and families. Loneliness and isolation is something that addicts face every single day. As I said in one of my earlier blogs, “We can make a difference by refusing to allow ourselves to be islands. Our world, our country, our town or city, and even your street, heck, even your home, could be a happier place to live, if we accept the responsibility and challenge to look after those around us. Not just our family, not just our friends, but strangers. Those who we will meet just the once, but perhaps for that one person, and that one moment in time, they might feel visible, and the shroud of loneliness that they feel has cloaked their very existence might for a moment fall, and give them hope.”
Don’t get me wrong, this isn’t THE solution, but I think it is part of one. I’m a massive believer that if we looked out for others more, that our world, their world, and the world would be a happier, healthier and better place to be. 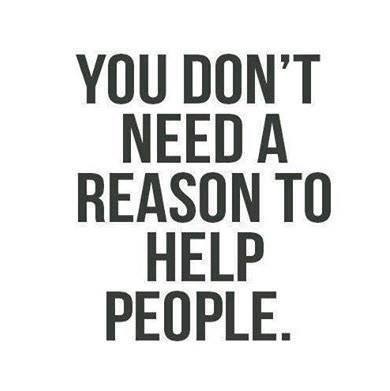 As a 16 year old lad, who wanted to make a difference, I could think of only one thing to do. I bought sandwiches and drinks from my limited pocket money, and took them down to those sitting outside what was, “The Soup Kitchen” for the homeless. It wasn’t a lot because I couldn’t afford a lot, but I sat with the men and women I gave the food to and talked to them. After a few weeks, some of my friends wanted to come along with me too.  I can still remember their faces lighting up as we gave out the food and sat with them, and as the realisation hit them: they were valued.

It’s one of the best feelings in the world, knowing that because of you, someone else feels valued. We might not have all the answers in the world, but we do have, every single day, the opportunities to make others feel valued. If we can do that, for those we know, and for the strangers on the street, we will make a lasting difference, and be all the happier for it.

“Not all of us can do great things. But we can all do small things with great love.” Mahatma Gandhi

This is one a series of blogs being posted during Alcohol Awareness Week. Please click on the titles below to read the others:

Does everybody have an off switch?

It's not big, and it's not clever

Come and have a look at how we help and if you feel that you could make a difference, you could even come and join us.